It was the highly anticipated slab of video vindication brought to you by Camp Motion Pictures and LUNCHMEAT Magazine! In attendance was director Gary P. Cohen , writer Paul Kaye and Fangoria Managing Editor Michael Gingold. There was VIDEO VIOLENCE trivia by Johnny Dickie for prizes and a bunch of groovy giveaways! Need a copy?
Visit http://www.alternativecinema.com/ above: The Groovy Ghoulies of podcasting are back!

A New Film by William Hellfire! "Upside Down Cross"

From the director of Duck! The Carbine High Massacre and The Devil’s Bloody Playthings comes a shocking new tale of demonic possession and secular evil. Abandoned, abused by the police and in the throes of withdrawal, Nadine, a drug addicted young prostitute, returns to her childhood home and the mother she ran away from.  Nadine’s mother, Delilah; a fanatical Christian who believes demons have possessed her daughter, searches for a “cure” for Nadine’s erratic behavior.  When she finds a rogue preacher willing to exorcise her daughter for a fee, neither realizes they have invited the devil into their home.  While her mother turns a blind eye to the bizarre practices unfolding in her own home, Nadine, wracked with mental and physical pain, has no choice but to put up with the preacher’s increasingly violent charade.

You can help produce this feature! Visit William's IndieGoGo page and find out more - http://www.indiegogo.com/projects/upsidedown-cross Theatrical Premiere for Dry Bones and Six Fingers in

Buffalo, NY –
Dry Bones and The Legend of Six Fingers – a found-footage monster movie-  which were shot back to back in the Buffalo-Niagara region of Western New York, will have a Double Feature World Premiere on Thursday, September 26th at the Market Arcade Film and Arts Center in Buffalo, followed by theatrical screenings at the Screening Room Cinema Cafe in Amherst.  Dry Bones was directed and produced by Gregory Lamberson (Slime City, and The Legend of Six Fingers, also produced by Gregorgy Lamberson, was directed by Sam Qualiana (Snow Shark).

The Legend of Six Fingers plays at the Screening Room in Amherst on Friday, October 11th and Saturday, October 12th at 9:30 pm.

Distribution Announcement
Following its limited theatrical and festival run, we are happy to announce The Legend of Six Fingers will be released to home entertainment by Camp Motion Pictures. Babysitter Massacre – Directed by Henrique Couto, BSM - a  gruesome indie slasher in the tradition of Slumber Party Massacre and House on Sorority Row - is one of the first series of Camp’s micro-budget initiatives to be completed, and will be available 10/15/2013. Zombie eXs in-store event at NYC’s Forbidden Planet this Friday, August 13, 2013 at 7pm.  Get your photo taken with a ZOMBIE EX, watch the movie and get a free Zombie eXs CD Soundtrack!  Forbidden Planet is located at 832 Broadway NY NY 10003. Video Violence in-store event at NYC’s Forbidden Planet featuring director Gary Cohen!  Friday, August 20 at 7pm, play a Video Violence trivia game, pick up your copy of the limited edition VHS VVDVE exclusive and leave with a Polaroid of you and Gary!

Check out events at the Forbidden Planet NYC website! http://www.fpnyc.com/

That's it for now! See you in two weeks! That's me, today in the FPP Studio recording an express episode of The Alternative Cinema Podcast to raise money for indie filmmaker Sam Qualiana!

For those of you who don't know me, My name is Michael Raso. I've produced many, many low-budget, indie films over the past 25 years and now it's time for me to pitch in to help a fellow filmmaker

Sam needs $4,000 to complete his new monster movie The Legend of Six Fingers - a flick about the search for Bigfoot!

Here myself and William Hellfire on the July 2013 Alternative Cinema Podcast why we want YOU to contribute:

Here's Sam (and Andrew Elias in his YouTube Video) chatting about raising the finds:


I guaranteed to Sam that for every dollar he raises, I will match funds! Please follow the link below and let's help Sam make his movie!

Thank you and see you soon on The Alternative Cinema Podcast!

Listen on iTunes, the AC Site or below!

The AC Podcast Gang made it through NJ’s Hurricane Sandy and is back to cit-chat about The Death of the Twinkie, Memories of King Kong / Godzilla on Thanksgiving and the gang's favorite “Turkey” of a movie! This and much more!!! Features Michael Raso, Erin Russ, William Hellfire, John Fedele and special guest Kevin Neblung!

The AC Podcast is Back!!! After being knocked on their ass by Hurricane Sandy in NJ, Michael Raso, Erin Russ, William Hellfire and John Fedele are back with the November AC Podcast. Chiller Theatre ReCap!
The Russ and Williams give us their Chiller Theatre recap. For those of you who don’t know, The Chiller Theatre Horror Expo is the east coast’s premium genre convention. Erin met her idol Barbara Steele (the star of Mario Bava’s BLACK SUNDAY). Michael Ras made made a guest appearance with FilmPhotography Podcast co-host Mat Marrash. With film cameras loaded and ready, Mike and Mat shot up the show on old-fashioned film! The End of Hostess Twinkies!
Michael Raso announces (from AP News) that the Hostess Company has been shut down. Hostess makes Twinkies, Sno-Balls, Cup Cakes, Wonder Bread and also Drakes’ Devil Dogs! (above: John Fedele crying over the Twinkie news) The NEW Alternative Cinema Catalog is Out!!!!!
The new catalog features an entire VHS section! Erin mentions some of the rare Factory 2000 VHS titles available including the notorious Vampire Strangler (featuring William’s Willie!)

above: The notorious VAMPIRE STRANGLER trailer The new catalog also features awesome T-Shirts!!!
Also, order any DVD or T-Shirt and get 10% off your order (when you mention the 10% savings in the special message area when ordering!)

WWOR-TV’s Thanksgiving Monster Movie Marathon!
The gang talks about the days (in the 1970s / 80s) when Channel 9 played a monster movie marathon every thanksgiving.

Favorite Turkey Movies
A “turkey” is a move that’s so bad that it’s good! The AC gang weighs in…

Kevin’s turkey pick is Godzilla vs The Smog Monster William sites Octaman as his wild turkey and says that The Russ looks like Octaman!! He also mentions a few others but says that his ultimate favorite turkey is Track of the Moon Beast (trailer below)!


Thanks for listening – See you next month! We're on iTunes too Review the AC Podcast on iTunes!
Do you enjoy the AC Podcast? If so, please write a nice review on iTunes! Your input is important to us! Write to us too - at Podcast@AlternativeCinema.com

Alternative Cinema DVD Store
Did you know that AC carries a huge catalog of cult, creepy, sexy, indie movies?! Get the print catalog by calling Justin at (973) 282-2226 and akings for it. Tell him The AC Podcast says “It’s Free!!” above: The Alternative Cinema Print Catalog!

Enter the Halloween Contest!!!
Win a VHS horror movie, Erin Russ (Dracula's Daughter) mix CD (of cool Halloween music and TV spots!), Pumpkin Pop Rocks, William's original Splatter Art! and an Autographed Picture of “The Russ!” All you need to do is send an e-mail to us telling us what your favorite Halloween costume is! (Tell us a little about yourself as well!)
Enter between October 15 – 21, 2012
e-mail us at Podcast@AlternativeCinema.com above: Erin Russ eating Pumpkin Pop Rocks. Win some by entering our contest!

Shawn Costello’s “Risky Behavior”
The long awaited memoir from the man who secretly invented the sex movie.
Shaun is asking you to pre-order and support his book!
http://www.kickstarter.com/projects/472062583/risky-behavior-a-memoir

Jack-O-Lantern Blaze on the Hudson
https://www.hudsonvalley.org/events/blaze?utm_source=Google&utm_medium=CPC&utm_campaign=Blaz%2B2012&gclid=CJ2U94ih_rICFcqj4Aod514AJQ above: Michael Raso's photo of William dressed as Orville from "Chicdren Shouldn't Play With Dead Things."

Thanks for listening – See you next month!

Posted by Alternative Cinema at 11:51 AM 4 comments: 
VHS has been making a comeback with such fan magazines as LunchMeat Magazine. Mike introduces an interview done this past summer at Artscape 2012 in Baltimore, MD. VHS/VIP - The tribute to VHS at Artscape 2012 - curated by Josh Schafer, editor of Lunchmeat Magazine. Lunchmeat is an independently printed magazine that celebrates the obscure and esoteric in cinema (including VHS tape)

Breaking News
Gene from the Third Eye Cinema Podcast visits the AC Podcast and offers some breaking news. Gene reports about the postings on the Internet about the death of actress Mary Mendum (a.k.a. Rebecca Brooke). Mary acted in many, many Joe Sarno films including Confessions of a Young American Housewife and Laura’s Toys. Details of Mary’s passing have not been confirmed by the Sarno family at this time.


Low-Budget filmmaker Todd Sheets suffered a heart attack this past summer. Todd is best know for such DIY movies as Zombie Bloodbath and Zombie Rampage. Todd is doing well and the whole AC gang wishes Todd a speedy recovery.

Shocking Tee!
William has been wearing his Forced Entry T-Shirt when visiting the mall and has been getting lots of attention! 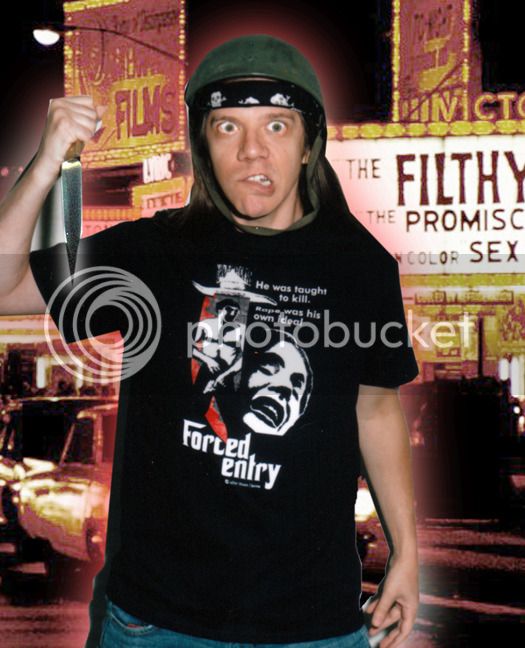 The Forced Entry Tee along with Video Violence, Cannibal Campout and Misty Mundae T-Shirts are available at Alternative Cinema

The AC gang discusses Forced Entry Shaun Costello and his notorious 1970s Time Square hardcore features. Mike mentions the fact that he attended the Famous Monsters Convention in 1974 in NYC and that he suspects that Shawn Costello was shooting one of his films in the same venue – the Commodore Hotel.

The term Giallo, literally “yellow” in Italian, originally referred to a series of crime novels with trademark yellow covers. Giallo, as a film genre of Italian thrillers that grew out of these pulp fictions starting in the mid 60s, became wildly popular in the 70s, then faded away in the early 80s. Giallo left a legacy of films often overlooked but widely influential on filmmakers such as Brian De Palma, Quentin Tarantino, and Darren Aronofsky. Apart from the signature blend of style and kitsch aesthetics, the genre features some of the most innovative scores ever created, by the likes of Ennio Morricone, Riz Ortolani, and Goblin. While these films have enjoyed a revival of interest due to DVD releases of several titles, they have yet to receive the 35mm treatment they absolutely deserve in a city like New York.

Fiona Apple is on tour!

Erin Russ is the #1 Fiona fan in the entire world!

Fiona Apple McAfee Maggart (born September 13, 1977) is an American singer-songwriter and pianist. Apple garnered international acclaim for her 1996 debut album, Tidal, which was a critical and commercial success. She received a Grammy Award for Best Female Rock Vocal Performance for the single "Criminal" from that album in 1998.

After Tidal, Apple released the critically acclaimed, though less commercially successful albums, When the Pawn... (1999), Extraordinary Machine (2005), and The Idler Wheel... (2012).

Alternative Cinema will be vending at The Chiller! Erin’s fav guests are Barbara Steele and The Little Punk People!

Check out the guest lineup at http://www.chillertheatre.com Look for Henrique at Cinema Wasteland!


That’s not all! William and Erin are the proud owners of Lint Lizard!


Desiree Saetia Interview
Porkcop II and Zombie Babies are now on DVD!
Zombie Baby star Desiree Saetia drps by the AC Studio and chats all about working with Eamon Hardiman and Ruby LaRocca William obsesses over the films that include “Tintorera,” “Gorilla King” and “Treasure of the Amazon.” All feature his favorite actor Hugo Stiglitz

Michael and Gene discuss the films of Joe Sarno
One of the most prolific and distinctive auteurs to emerge from the proto-pornographic sexploitation film genre of the 1960s, Joe Sarno had written and directed approximately 75 theatrically released feature films in the sexploitation, softcore and hardcore genres as well as a number of shot-on-video features for the '80s hardcore video market.

Write to the AC Podcast! Podcast@AlternativeCinema.com

See everyone in two weeks!!!


Posted by Alternative Cinema at 9:34 AM No comments:

Have you listened to the December Podcast yet???? Posted by Alternative Cinema at 8:24 PM No comments: